Who are the Ones the World Leaves Behind? 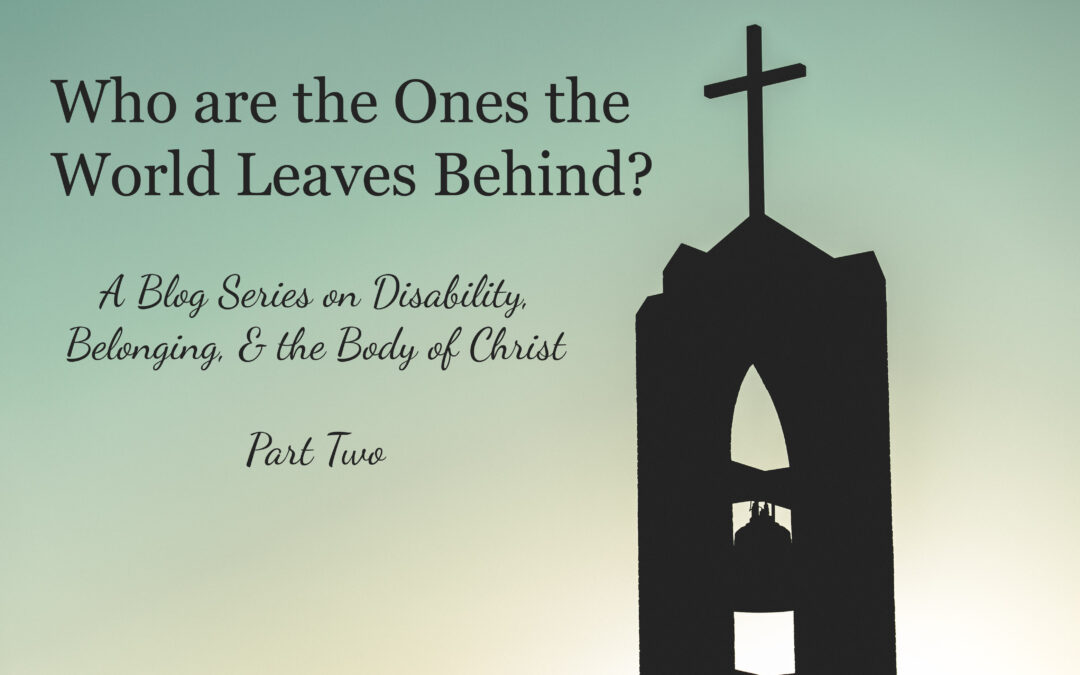 The poem you read last week invites you to ponder the “ones the world leaves behind.” It is true that many people could be called “the stranger” until they are brought into community. Many are also marginalized and excluded for being part of minority groups. For the purpose of this series, let us consider people with disabilities.

Disability exclusion has been happening throughout the history of America. The Church is not immune, as I’ll explain in a moment. When the Europeans came to North America and began colonization, people with disabilities were excluded. They were unwanted in the new world.[1] Exclusion was still prevalent in the days of immigration in the late 1800s and early 1900s.[2] However, as epidemics, like polio, industrialization, and wars left more people disabled, society wrestled with what to do.[3]

One response in cities was to adopt “ugly laws.” “People with disabilities were to be made invisible.”[4] This left people extremely isolated and feeling rejected.

Another response came from people like P. T. Barnum, who wanted to display the various expressions of human bodies in a museum.[5] Think of the movie, “The Greatest Showman.” The performers didn’t have to hide at home. They found a community.

Disability advocacy and activism grew out of the frustration of being excluded from so many areas of society. In recent decades, advocates pushed the government to pass several legislations that allow civil rights to people with disabilities.[6]

The latest law was the Americans with Disabilities Act of 1990. The ADA was meant to provide more access and civil rights to this minority group. The sad reality is that “churches and other religious bodies lobbied to be excluded from its requirements,” and all places of worship were granted such exemption thanks to section 12187.[7] Disability scholar Kevin Timpe poses two great questions in his book, Disability and Inclusive Communities, “What if, rather than seeking to be excluded from these requirements, churches saw them as a bare minimum and actively sought to exceed them? What if churches instead were beacons of inclusion that set a high standard for what inclusive and welcoming communities ought to look like?”[8]

For the Church to be a welcoming place, inclusion must be built into the overall mission. Next week we will examine this aspect.

Reflect on Your Own
Have you ever been overtly excluded from a group? How did it feel?